The founder and director of Terrazas de los Andes, Hervé Birnie-Scott tells db on how his quest to make a fresher style of Malbec in Mendoza is pushing him to higher and higher altitudes.

The career of Birnie-Scott, who grew up in the Loire Valley and worked at an altitude of more than 1,000 meters in Mendoza, went through other work abroad: “In 1991, being an agronomist and oenologist , and having worked for probably three years between Napa, Australia and New Zealand, I was contacted by Moët Hennessy who already owned a winery in Argentina…”

It was during his exploration of the region’s terroir over the following decades that the idea for Terrazas de los Andes began to germinate in Birnie-Scott’s mind. He noted that Argentina was “already a very big wine producer”, but that “the local market was everything”. What Mendoza presented to him was a “playground” where he could experiment and enter with “eyes completely open and absolutely no briefing”.

“Great wines are grown, not made,” as Birnie-Scott once said, and for him, the secret to growing these wines is altitude.

“It was not easy to have French grape varieties in Mendoza, which has a lot of Spaniards and Italians… Malbec is a cool climate grape variety. There’s a problem if you don’t understand that coolness comes with elevation and you crave coolness, then you’re growing Malbec in the wrong place.

“It’s the same with Cabernet Sauvignon,” Birnie-Scott continued. “It calls for cool conditions – rocky soils and gravels are fine, but you need it to reach maturity that doesn’t bake the fruit.”

The lofty ambitions of Terrazas de los Andes are reflected in the elevation of its vineyards, with El Espinillo at Gualtallary, 1,650m above sea level, being its highest, a climate suggested by Birnie-Scott as “Champagne with sun”. Describing the wines from this elevation, he said: “It has this kind of cassis, just bordering on grassy, ​​but balanced… The evolution in the bottle will bring something like graphite, even a little flint .”

From Grand Malbec, the signature wine of Terrazas de los Andes, Birnie-Scott noted how each vineyard the grapes came from imparted its own character to the blend. Las Compuertas (1070m above sea level), in Lujan de Cuyo, gives it a “very classic character, soft, velvety, nicely floral”. Los Chacayes (1,200 m altitude), in the Uco Valley, is the “wildest” vineyard, offering a more robust contrast. Los Castaños (1,100 m above sea level), also in the Uco Valley, which gives an element of the “new classic” style.

Together, in proportions that vary from year to year, the wine has “more density, more concentration” than the regular Malbec from Terrazas de los Andes, but “still vibrant dark berry fruit” with acidity. intact.

Even with the cooling effect of the altitude, early picking was essential to avoid overripe fruit and preserve the natural acidity. This decision stems in part from the advance of the 2020 harvest due to the impending confinement: “This harvest made us do in one year what we could have done gradually in five. We went from harvesting most of our grapes in the first half of April to finishing on March 21 – and since then, even in a cooler year like 21, we have finished harvesting in March.

“With proper viticulture, you can have something balanced in terms of ripened phenols, despite harvesting early, and reduced irrigation favoring early ripening of the skins, you can harvest when the aroma is at its peak. “

This more delicate and vibrant style stands in stark contrast to the large, rich wines that consumers typically associate with Argentinian Malbec: . and drinkability.

But the increase in altitude itself leads to increased risks, beyond the hail generally associated with Mendoza: “Climate accidents linked to frost are more difficult. We have suffered a lot this year. Yesterday and the day before yesterday we lost a lot of grapes due to one of the worst frosts in 20 years. We will have to deal with less water and more frost. We know how to manage heat waves, but with the frost we can’t do anything. Immediately after this interview, The government of Mendoza has declared a state of emergency over the frosts.

While charcoal burners can provide enough heat to reduce grape losses, the decision was made to stop “actively fighting” frost due to the environmental impact of such heaters: “In one night CO2 emissions were the equivalent of 10 times the crop’s CO2 emission per year 10 years from one night.

Terrazas de los Andes will try the wind grid as a low-carbon alternative, but facing extreme conditions remains a difficult task: “With this new climate, you must be prepared to find solutions against climatic accidents. When you lose 100% of your fruit above 1,400 m, it’s hard. 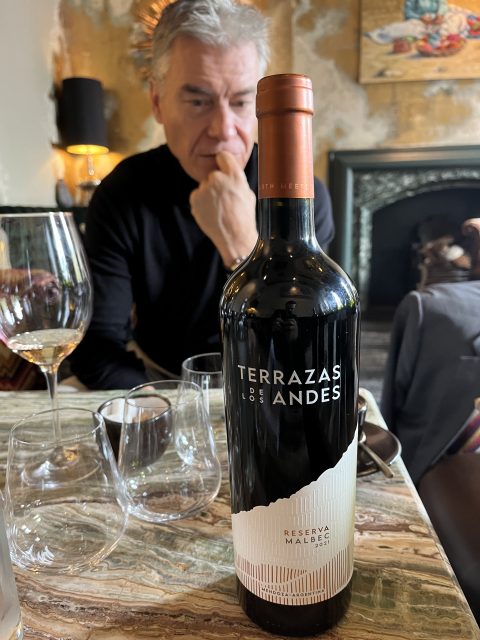 Despite some of the difficulties of making wine at such altitudes, Birnie-Scott has no intention of descending. The new label of Terrazas de los Andes is a celebration of the mountain: “It shows our journey of ascent over all these years, higher and higher, and the purity of this virgin land and the white glaciers that provide the ‘water.”

Other Argentinian growers are also experimenting with altitude. To read how Bemberg finds different expressions of Malbec at different altitudes, Click here.

Mines to wines for Battambang location