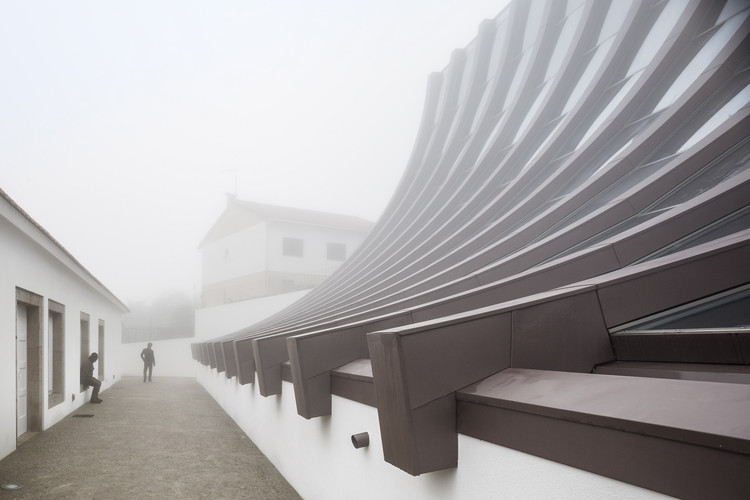 Text description provided by the architects. The Douro territory in northern Portugal has the oldest demarcated wine regions in the world. The city of São João da Pesqueira is historically the center of this region and, in order to preserve the traditions of ancient knowledge that range from wine production to the techniques and traditions of the workers, decided to build a wine museum.

Located near the city center, the museum is presented as a semi-underground building, behind a 19th century wine press building. Restored and included in the museum’s main exhibition, the press is an independent construction capable of producing wine in an archaic way. Also has a temporary exhibition gallery. The main building is distributed by a vertical arrangement of six floors. The exhibition spaces are developed between tunnels and galleries where the contrast between light and shadow is explored in different visual relationships provided by the gaps between floors.

The whole space is unified by the sunlight filtered through a concave glass steel structure covered in brown zinc, and by the contrast between the textured wood and the raw concrete walls. The building materials and construction methods are simple traditional walls and woodworking, reflecting the austerity of the region.

The Bordeaux Wine Museum announces its expansion in Beijing

Boisset opens a “tribute to Napa Valley” wine museum, a tasting room in a 145-year-old building